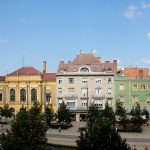 /NCMA welcomes research papers that contain original contributions on non-classical models of automata and applications and related subjects. Many non-classical models of automata and grammar-like structures are the natural objects of theoretical computer science. They are studied from different points of view in various areas, both as theoretical concepts and as formal models for applications. Aims and scope The aim of the workshops on “Non-Classical Models of Automata and Applications” is to provide a forum for researchers who work on different aspects of non-classical models of automata and grammars to exchange and develop novel ideas. In order to emphasise the workshop character of NCMA 2016, we also invite short contributions that report on recent results or ongoing work in addition to full papers. However, in contrast to the accepted regular (full) papers that will be published in the proceedings, the accepted short papers will appear in a separate technical report. Topics for NCMA 2016 include formal models inspired by linguistics, bio-computing, text processing, document engineering, self-assembly, etc., bio-inspired models of automata and generative devices, cellular automata, forgetting automata and restarting automata, automata with additional resources, regulated rewriting/automata, networks of automata or generative devices, models of cooperation and communication, quantum automata. Other related topics, in particular, contributions dealing with questions on classical automata and generative devices are also welcome.