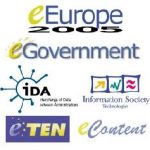 IDA – Interchange of Data between Administrations IDA is an implementation programme, for which short-term operational results are expected. Its objective is to enable public administrations in the Member States and at the EU level to exchange electronic data in order to implement European legislation. This is made possible by means of electronic networks and software tools. Initially launched in 1995, IDA is now in its second phase (IDA II, 1999-2004) and mainly focuses on back-office networking and central administrations, although networks to benefit citizens and businesses have also been made available (e.g. SOLVIT, PLOTEUS). However, the rapid emergence of e-government as a political priority across Europe and the increasing need for interoperability of public services in the single market has led the programme to evolve, under the driving force of eEurope, towards broader objectives. This evolution will be confirmed with the adoption of the third phase of IDA, due to start in 2005. Entitled IDABC (Interoperable Delivery of pan-European eGovernment Services to Public Administrations, Businesses and Citizens), the new programme will become the main vehicle for the delivery of pan-European e-government services, a development called for by the Ministerial Declaration that concluded the European eGovernment Conference in July 2003. Compared with the existing programme, IDABC will increase the effort in support of front-office services for businesses and citizens. IDA is managed by the IDA Unit in the European Commission’s Enterprise DG. The four programmes are therefore different in many respects: legal basis, nature, objectives, management frameworks, expected results, but also funding levels and procedures. IST, eTEN and eContent provide partial funding for the research, development, market validation and initial implementation of methodologies, products and services for which the final owners or customers are the consortia receiving the funds. IDA, on the contrary, operates by procuring IT services from the market, in order to set up e-government services, networks and tools on the basis of requirements jointly defined by the European Commission and the relevant administrations in the Member States. IDA pays 100% of the development and implementation costs and the Community is the final and only owner of the results.